The first week of September is already in the rear-view mirror. A last-minute trip to Tennessee and an overloaded work schedule left me with little time to write.

Last month, my dedication to the #31writenow challenge took too much of my attention. Now I’m trying to avoid the other extreme by ignoring writing completely.

So, I thought it wise to jot down a few goals for this month. Sharing them will help me focus and keep me honest.

Post two-three times per week. Before #31writenow, I had trouble meeting this goal. But after writing something every day for a month, a couple of times a week doesn’t seem that bad.

Return to yoga. (again) Similar to my relationship with writing, Yoga and I are either all in or all out. Missing one day will have me off the wagon for months. I signed up for an after-work yoga class that starts Monday. Hopefully, it will get me back on track.

Be an early riser. My love of sleep and the coziness of my bed are the main reasons I often skip yoga. I know good and well that the morning (before the kids rise) is my best opportunity for practice. I also know I feel much more with-it and focused when I spent 15 minutes on yoga and meditation.

Plan tomorrow plus two. Time Management guru Julie Morgenstern recommends ending each day with a review of tomorrow’s agenda plus the two days beyond. When I heed this advice, I start the day feeling prepared. Plus, it helps curb missed appointments.

I’ll keep you updated as the month progresses, but feel free to offer up a swift kick in the rear if I fail to do so.

What tips do you have for maintaining balance?

I didn’t realize how much I was channeling my inner CH until I found this pic on a celebrity photographer’s site. I try my best to respect photographers’ usage rights, so hop over, take a peek, and let me know what you think.

I’ve been a fan of TLC’s What Not to Wear since the show’s second season. I tuned in from time to time during the first season, but Stacy London was partnered with some long-haired dude that I thought was mean. Once Clinton Kelly came on board, I made it a point to watch. They had great chemistry and did their best to have a positive impact on the show’s guests. The two of them, along with Carmindy, Nick, and later, Ted, have made over hundreds of contributors who have run the gamut of fashion disasters. Their influence went beyond the clothes; they helped people tackle issues that were weighing on their self-esteem.

I was never on WNTW, but I wanted to be. And during the few seasons when the team worked with both men and women, I submitted a entry for Hubby. They didn’t pick him, but he sure needed it.

Despite the fact that no one from our household won a trip to New York and five grand for a new wardrobe, WNTW helped me find my own personal style. I learned much about what works for me:

Fit and Tailoring. Ill-fitting clothes are a disservice. Altering works wonders. If altering isn’t in the budget, I leave the item at the store.

Dark Denim. It’s extremely versatile. It works at the office, on a date, or while running errands on the weekend.

Jackets. I LOVE jackets. They add structure, balance out shape, and add a layer of interest.

Color, Texture, Pattern, and Shine. This is Clinton’s mantra. The right mix of these elements can make for a great outfit.

Five-Minute Face. Carmindy is a genius. She took the fear out of make-up and explained how a few choice products are all I need.

It’s not you. It’s the clothes. I walked into a J.Crew once and tried on every pair of pants in the store. Nothing worked, and I left feeling as if there was something wrong with me. When I learn to accept that it was a flaw in the clothes and not my body, shopping became a lot more fun, and I was open to trying new things with no hard feelings.

Thanks so much WNTW. No telling what would be in my closet if it weren’t for you.

There are three things I absolutely love when it comes to clothes: black and white, stripes, and sales.

This trio formed a perfect union my latest find, a sleeveless tunic from Marshall’s. It was on clearance for $10. I’m not familiar with the brand, Yuni Los Angeles, but it’s made from a nice flowy fabric, and the denim trim with button detail gives it charm. That totally justified adding another stripe to my collection.

It paired well with my red-orange pants. That color is borderline neon, so the tunic helped tone it down.

Mini Me gave this outfit her seal of approval, and she posed me for this pic.

On Monday, I shared my excitement about the job’s new denim-inclusive dress policy. I vowed to wear denim to work every day this week. It was easier said that done.

First of all, it’s summer, and denim is hot. My seasonal wardrobe is full breezy dresses skirts and dresses, which feel effortless to me. Denim seemed like work.

Then, I took a closer look at the dress policy. We received an email emphasizing that we stay professional and polished, and it suggested we keep a change of clothes handy in case of an emergency no-jeans client meeting.

I needed to plan two outfits for every one day of jeanswear? I was about to hang it up and reserve my dark blues for Fridays.

Then I came to my senses. The office maintains a freezer-like atmosphere. Anytime I wore one of my breezy summer frocks, I spent the day shivering. Plus, I have a closet full of jeans that I wish I could wear more often. This was my chance.

So, here are the pics. Thanks to my coworker J for Tuesday’s shot and Mini Me for the rest of the week’s takes. She wanted me to stand in the same spot each day, just like I make her do every first day of school. (I was on vacation Monday. I’m pretty sure you don’t want to see me in my PJs) 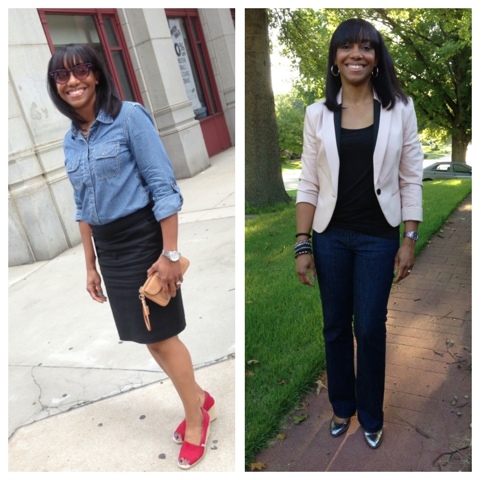 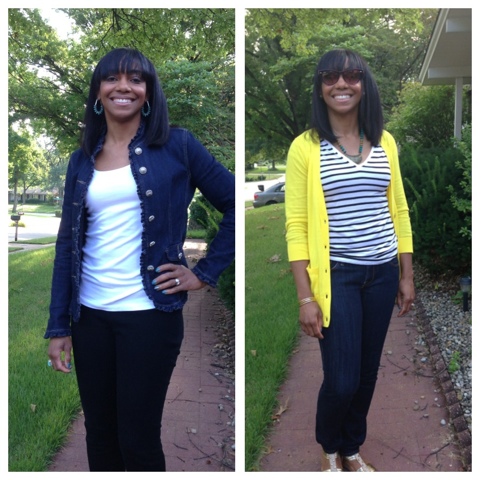 Writer in the making. Blogger. Wife. Mom of two. Seeking the ever-elusive balance between family and career. All opinions are my own.